“We are active Catholic men
who put our faith in action”
- James Stell, Grand Knight 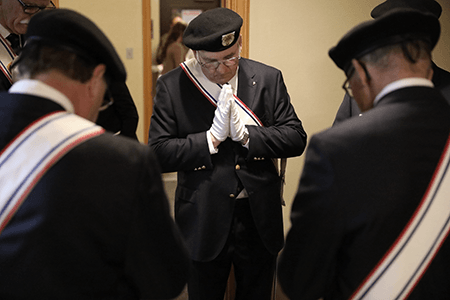 The Knights of Columbus is the world's largest Catholic fraternal service organization founded in 1882 by Father Michael J. McGivney in New Haven, Connecticut. Men must be 18 years old to join, in good standing with the Holy Catholic Church, and accept the teaching authority of the Catholic Church. The Knights of Columbus regularly raise needed funds for the parish, school, and community at-large with their many service projects aimed at making people’s lives better. While each Knights of Columbus Council helps their own local community, the organization as a whole has a varied and illustrious history. Many might not know that the Knights of Columbus were instrumental in adding “under God” to the Pledge of Allegiance of the United States of America. Membership in the organization has four degrees based on four principles: charity, unity, fraternity, and patriotism. There are also leadership positions, from Assembly Commander to Supreme Master, and a color guard which marches in parades.

Third Wednesdays of every month
At the Knights of Columbus Hall.