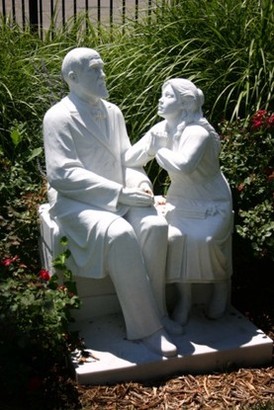 When reading the accounts of the patriotic deeds of French heroines, especially the Venerable JOAN OF ARC, I had a great desire to imitate them ... I considered that I was born for glory . . . [God] made me understand my own glory would not be evident to the eyes of mortals, that it would consist in becoming a great saint!" (Story of a Soul. p.72 - Unless otherwise noted, all page numbers refer to quotations taken from Story of a Soul, the autobiography of St. Therese). These most daring words come from the writings of St. Therese of the Child Jesus and the Holy Face (affectionately known as the Little Flower), a Discalced Carmelite nun in the Carmel of Lisieux, France. Born Marie-Francoise-Therese Martin on January 2, 73, the youngest of nine children (four of whom died in infancy or early childhood), St. Therese was raised in a devout and holy family whose parents' greatest desire was to see their children eternally united to Jesus in Heaven. Thus, at a very young age, St. Therese as placed on the Road to Perfection. "From the age of three, I began to refuse nothing of what God asked of me," exclaims St. Therese in her Story of a Soul. But St. Therese soon learned that the road to sanctity consisted not so much of consolations and inspiring thoughts and desires but rather in embracing trial and suffering. "I didn't think then that one had to suffer very much to reach sanctity, but God was not long in showing me this was so." (P.72) Suffering began for St. Therese at the death other mother on August 28, 1877. Although St. Therese's older sister, Pauline, became a "mother" to her, she still suffered emotionally and psychologically, causing her to be a hypersensitive child who easily cried. Then, in October 1882, Pauline entered the Carmel of Lisieux, leaving St. Therese again without a "mother." St. Therese was devastated by this second loss, and, in March 1883, she fell ill with nervous tremblings and hallucinations. Fearing her death was near, her father and sisters prayed for her cure; and on Pentecost, May 13, 1883, through the intercession of Our Lady of Victories, St. Therese was cured. She continued, however, to suffer from her sensitive nature and a scrupulous conscience brought on by the curiosity of others regarding her miraculous cure. Finally on December 25, 1886, after Midnight Mass, Therese was given what she calls her “Grace of Conversion”. After a harsh word from her father, St. Therese was able to hold back her tears, run to him with a smile and fill his heart with love, restoring his usual cheerfulness. "Therese had discovered once again the strength of soul, which she had lost at the age of four and a half." She says, "The work I had been unable to do in ten years was done by Jesus in one instant."(P.98)

With her strength of soul returned, St. Therese began to reach outside herself through a great desire to save souls by means of prayer and sacrifice. This charity other heart grew with her and led her to answer the call to the religious life. After a struggle to convince the authorities of the authenticity of her call, St. Therese received the much-awaited permission and entered the Lisieux Carmel on April 9, 1888, joining her two sisters, Pauline and Marie. (One more sister, Celine, would join them six years later.)

"Meeting with more thorns than roses," St. Therese found Carmel to be just as she had expected. "Suffering opened wide its arms to me and I threw myself into them with love . . . Jesus made me understand that it was through suffering that He wanted to give me souls and my attraction for suffering grew in proportion to its increase." (P. 149) Not having any illusions, then, about attaining sanctity, and well aware of her weaknesses, St. Therese sought perfection by pleasing God in all things. She performed many acts of kindness and love, offering even the smallest of sacrifices to God. She volunteered for the most unpopular chores and chose to spend her recreation time with those whose personalities were the most disagreeable to her. Always cheerful, giving to others despite the cost to herself, St. Therese of Lisieux, grew into union with Jesus. So united was she to Him that she was able to endure with love and a smile great and varied sufferings: an intense dryness in prayer; emotional sufferings at the sickness and death of her father; the temptation to doubt the existence of Heaven; and excruciating physical sufferings caused by her tuberculosis.

It was a life of suffering that helped St. Therese to formulate her Little Way of Spiritual Childhood. "I am too weak," says St. Therese, "to climb the rough stairway of perfection." (P.207) So Therese prayed and searched the Scriptures and therein found her Little Way: to remain small and humble of heart that she may be carried to Heaven in the arms of Jesus. She would remain as a little child, trusting completely in the infinite love and mercy of Jesus. On His merits alone would she reach sanctity. Two months prior to her death, Pauline recorded St. Therese as saying, "Sanctity does not consist in this or that practice; it consists in a disposition of heart which makes us humble and little in the arms of God, conscious of our weakness, and confident to the point of audacity in the goodness of our Father." (St. Therese of Lisieux: Her Last Conversations, P.I 19) "For this I had no need to grow up, but rather I had to remain little and become this more and more." (P.208)

And so was born the Doctrine of St. Therese's Little Way of Spiritual Childhood, a doctrine of doing small, ordinary things in extraordinary ways with great love. Her Way is a way of love. "Neither do I desire any longer suffering or death, and still I love them both; it is to love alone that attracts me... Now abandonment alone guides me... I can no longer ask for anything with fervor except the accomplishment of God's will in my soul. (P. 178) Suffering, then became sweet for St. Therese, since she saw in it the fulfillment of God's will. This Little Way of suffering climaxed on September 30, 1897. At the age of 24, as Therese was carried in the arms of Jesus into Heaven, she was able to exclaim her last words with all her heart and will, "Oh! I love Him! ... My God, 1 love You!" (P.271) 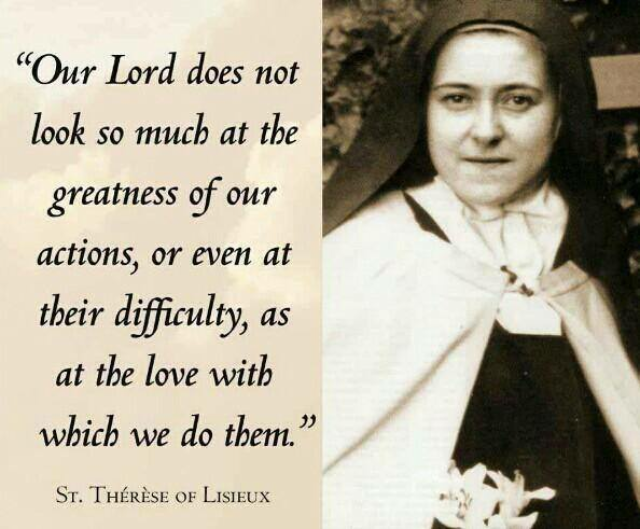 Before her death, St. Therese promised "I feel that my mission is about to begin, my mission of making others love God as I love Him, my mission of teaching my little way to souls. If God answers my requests, my heaven will be spent on earth up until the end of the world. Yes, I want to spend my heaven doing good on earth." (P. 263) God has answered her prayers and she remains with us today, guiding us along her way of Spiritual Childhood - "a way confidence and abandonment to [the will of] God" and a free choice "to love Jesus unto folly ."(P. 178)

Popes Benedict XV, Pius XI and Pius XII each recommended that we all should follow "the Way of Spiritual Childhood." Recognizing the importance of St. Therese's doctrine, Pope John Paul II declared St. Therese of the Child Jesus and the Holy Face Doctor of the Church on October 19, 1997. The Holy Father has strongly encouraged all to strive for sanctity no matter one's vocation in life. It is important, then, to remember the words of St. Therese: "My God, ‘I choose all!’ I don't want to be a saint by halves, I'm not afraid to suffer for You. I fear only one thing: to keep my own will; so take it, for "I choose all’ that You will." (P. 27)